It was a historic year for The Church of Jesus Christ of Latter-day Saints. Here’s a look back at 2018’s major moments

"Historic" might be the best way to describe 2018 for members of The Church of Jesus Christ of Latter-day Saints. Since President Russell M. Nelson became the president of the church last January, the 94-year-old leader has presided over two general conferences full of major announcements, called two new apostles, announced 19 new temples, reiterated the importance of using the church's name and embarked on global ministry tours on five continents.

Russell M. Nelson is announced as the 17th president of The Church of Jesus Christ of Latter-day Saints Tuesday, Jan. 16, 2018.

This past year, the church also announced that it will part ways with the Boy Scouts of America, commemorated the 40th anniversary of the 1978 revelation on the priesthood, sent humanitarian aid to areas dealing with natural disasters and released the first book in an official multivolume history of the church. The year might be best captured with this quote from President Nelson: "If you think the church has been fully restored, you're just seeing the beginning. There is much more to come. Wait until next year," President Nelson said near the end of his South American ministry tour. "Eat your vitamin pills. Get your rest. It's going to be exciting."

On Jan. 2, President Thomas S. Monson, the 16th president of the church for nearly 10 years, died at age 90. Members remembered the church leader for his eloquent conference talks, heart-warming personal accounts and his charge to always go to the rescue. Following President Monson's funeral, a new First Presidency was announced via a live broadcast from the Salt Lake Temple. President Nelson presented President Dallin H. Oaks as first counselor and President Henry B. Eyring as second counselor. "I declare my devotion to God our Eternal Father, and to his Son, Jesus Christ," President Nelson said during the broadcast. "I know them, love them, and pledge to serve them — and you — with every remaining breath of my life." President Nelson was sustained as the 17th president of the church during a solemn assembly of April's 188th Annual General Conference.

Mourners gather to pay their respects to President Thomas S. Monson of The Church of Jesus Christ of Latter-day Saints at his viewing at the Conference Center in Salt Lake City on Thursday, Jan. 11, 2018.

The naming of two new members of the Quorum of the Twelve Apostles was one of several announcements the church made in April's historic general conference.

Elder Ulisses Soares, left, and Elder Gerrit W. Gong walk to their new seats after being called as members of the Quorum of the Twelve Apostles during a solemn assembly, part of the Saturday morning session of the 188th Annual General Conference of the LDS Church at the Conference Center in Salt Lake City on March 31, 2018.

President Eyring read the names of Elder Gerrit W. Gong, the first-ever Asian-American apostle, and Elder Ulisses Soares of Brazil, the first-ever Latin American apostle, while reading a list of the quorum members. The two apostles both used the word "overwhelming" to describe their initial experience. "It has been very special to me to be part of the discussions of the issues of the church among the members of the Twelve Apostles and the First Presidency and add my little contribution as I bring some experience and background from different parts of the world," Elder Soares said.

During April's priesthood session, President Nelson announced a restructuring of priesthood quorums, with high priests and elders meeting together in one group called the elders quorum. "We have felt a pressing need to improve the way we care for our members and report our contacts with them," President Nelson said. "To do that better, we need to strengthen our priesthood quorums to give greater direction to the ministering of love and support that the Lord intends for his Saints."

In the next major announcement of the conference, President Nelson retired the home and visiting teaching programs, opening a new chapter in the history of the church called "ministering." The new program places a greater emphasis on serving and caring for others while offering members more flexibility. The change allows for 14- to 18-year-old young women to take part as companions to Relief Society sisters. "We will implement a newer, holier approach to caring and ministering to others," President Nelson said. "We will refer to these efforts simply as ministering."

Parting ways with the Boy Scouts

In May, the church announced it was ending its 105-year partnership with the Boy Scouts of America at the end of 2019. The church made the move to address the needs of a growing global church. In place of Scouting, the church will implement a new program for all Latter-day Saint young men and women, ages 8 to 18, with an increased focus on strengthening faith. "As a global church with millions of children and youth, we need to address diverse needs and fortify all children and youth with gospel-centered growth and learning experiences now more than ever," church leaders said in a news release.

Gladys Knight performs with the Be One Choir during "Be One" in Salt Lake City on Friday, June 1, 2018. The event celebrates the 40th anniversary of the 1978 revelation on the priesthood.

On June 1, the church commemorated the 40th anniversary of the 1978 revelation on the priesthood with a special program called "Be One" in the Conference Center. The event featured messages from President Nelson and President Oaks, music and dancing, and stories of faithful black Latter-day Saints. The celebration was attended by notable names like entertainer Gladys Knight, NBA basketball player Jabari Parker and others. President Nelson encouraged all to "build bridges of cooperation instead of walls of segregation."

Performers dance during "Be One" in Salt Lake City on Friday, June 1, 2018. The event celebrates the 40th anniversary of the 1978 revelation on the priesthood.

In October general conference, President Nelson made another major announcement, saying the time had come for a "home-centered, church-supported" form of worship.

Conferencegoers raise their hands to sustain President Russell M. Nelson during the Saturday afternoon session of the 188th Semiannual General Conference of The Church of Jesus Christ of Latter-day Saints in the Conference Center in Salt Lake City on Saturday, Oct. 6, 2018.

Church members were counseled to begin incorporating a new "Come, Follow Me" curriculum designed to strengthen families and individuals through home study. The new curriculum comes with a shorter Sunday meeting schedule, made up of a 60-minute sacrament meeting and 50-minute class, set to begin in 2019. "The long-standing objective of the church is to assist all members to increase their faith in our Lord Jesus Christ and in his Atonement, to assist them in making and keeping their covenants with God and to strengthen and seal their families," President Nelson said.

In August, President Nelson announced a new effort to emphasize using the revealed name of the church.

President Russell M. Nelson speaks during the Sunday morning session of the 188th Semiannual General Conference of The Church of Jesus Christ of Latter-day Saints in the Conference Center in downtown Salt Lake City on Sunday, Oct. 7, 2018.

Erik Ramsay and Amy Ramsay react to the announcement of 12 new temples during the Sunday afternoon session of the 188th Semiannual General Conference of The Church of Jesus Christ of Latter-day Saints in the Conference Center in downtown Salt Lake City on Sunday, Oct. 7, 2018.

Conference goers react to the announcement of 12 new temples during the Sunday afternoon session of the 188th Semiannual General Conference of The Church of Jesus Christ of Latter-day Saints in the Conference Center in downtown Salt Lake City on Sunday, Oct. 7, 2018.

Elder Quentin L. Cook, of the Quorum of the Twelve Apostles, looks over the "Saints: The Story of The Church of Jesus Christ of Latter-day Saints in the Latter Days" book in Salt Lake City on Tuesday, Sept. 4, 2018.

The first book in a multivolume official history of the church, titled "Saints: The Standard of Truth, 1815-1846," was released in September. Written in an easy-to-follow narrative style, the book tells the story of the early church while weaving in relevant individual accounts, giving readers a greater overall sense and context for how events unfolded. Elder Quentin L. Cook, a member of the Quorum of the Twelve Apostles, said the story is well-rounded and complete. "We feel that having a total picture that is transparent and tells the whole story, tells true accounts, that seen in context, almost everything will be faith-promoting and build faith," Elder Cook said. "So many things have been taken out of context, and seen as in a minuscule way. This now allows a complete picture that we think will bless the lives of the rising generation and our generation, even those of us that are older." A few days later, Elder Cook, accompanied by church historians Kate Holbrook and Matt Grow, discussed "Saints" and responded to questions from young Latter-day Saints in a Face-to-Face worldwide broadcast from the grounds of the Nauvoo Illinois Temple.

In August, the church joined a Utah coalition of medical professionals, community leaders and lawmakers in expressing opposition to the Proposition 2 marijuana initiative. But the church was not opposed to the use of medical marijuana. A few weeks later, church leaders asked the Utah legislature to legalize medical marijuana in a special session by the end of the year. Utah Gov. Gary Herbert called for that special session after the November election to discuss a new "shared vision" for medical cannabis. After a revised version of the medical marijuana bill passed both the Utah Senate and House of Representatives during the special session, Gov. Herbert signed it into law on Dec. 3.

Finally, the church announced earlier this month that Latter-day Saint young men and women can progress together as a group starting at age 11 and receive a limited-use temple recommend beginning in January, the First Presidency said in a letter distributed to all church members. "We desire to strengthen our beloved children and youth through increased faith in Jesus Christ, deeper understanding of his gospel, and greater unity with his church and its members," the First Presidency wrote. 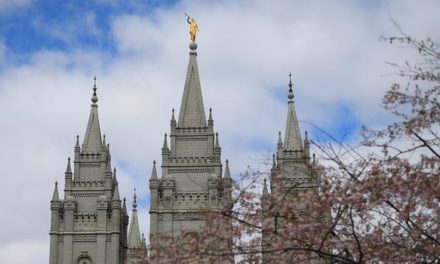 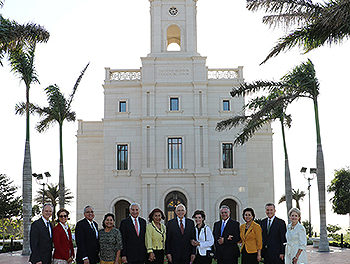 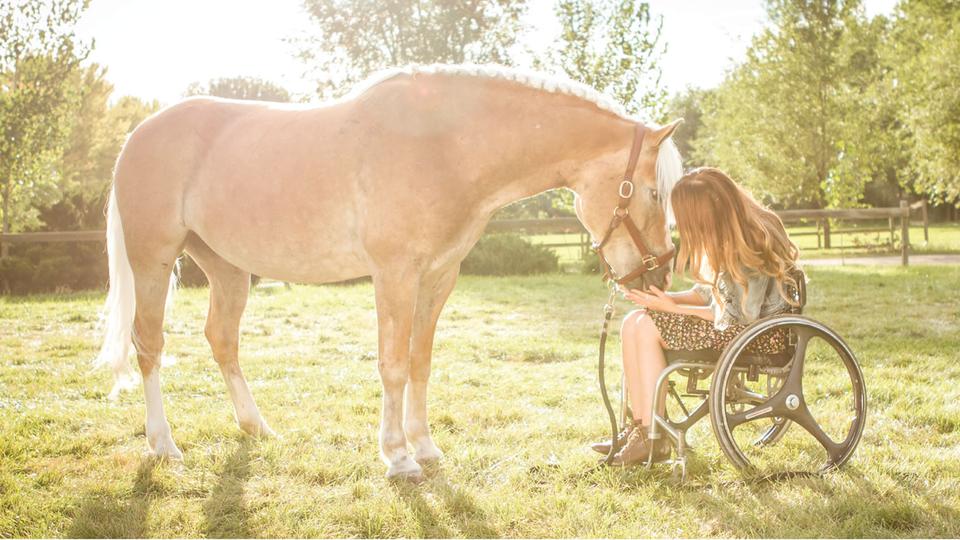 The Inspiring Story of Hope in Life After Paralysis: Cambry Kaylor